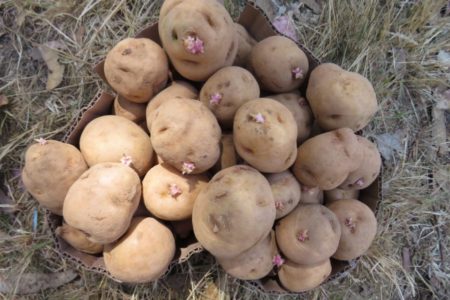 A new potato developed by breeders at the International Potato Center (CIP)  is the latest example of using the wild relatives of crops to adapt agriculture to new threats. The product of crosses between cultivated and wild potatoes, it combines the high yield and culinary characteristics of elite breeding parents with the disease resistance of wild species. It will enable farmers to produce better harvests and reduce their use of agrochemicals.

With support from the Crop Trust, CIP scientists spent years undertaking challenging crosses and evaluating thousands of progeny to select the best 16. Those 16 were evaluated in the field by farmers in the Andean highlands of Peru’s Junín and Huancavelica regions, in collaboration with the Peruvian NGO Grupo Yanapai, which resulted in the selection of the best candidate for release as a variety.

On December 29, 2021, CIP filed a plant breeder’s rights (PBR) application with the Peruvian National Institute for the Defense of Competition and Intellectual Property Protection (INDECOPI) for the potato variety CIP-Matilde. The PBR application will support CIP in the process of releasing that new variety in Peru. The registration process for release is now in the last stage of formal examination by Peru’s National Agricultural Health Service (SENASA). SENASA’s approval is necessary to release and promote the new variety among stakeholders, to facilitate the production of sufficient amounts of quality seed, and to ensure that CIP-Matilde is freely available for the benefit of farmers.

Late blight disease poses the greatest threat to potato production globally, forcing farmers to frequently apply fungicides to control it. While many late blight-resistant varieties have been released, the pathogen that causes the disease always develops variants that overcome a popular variety’s resistance. Because CIP-Matilde has resistance genes from two wild species, one of which has hardly been used for breeding, CIP scientists hope that it will be resilient under climate change, which could cause more virulent races of the late blight pathogen to appear. In field evaluations, CIP-Matilde was completely resistant to late blight and its yield was equal to or greater than the most popular Peruvian varieties.

CIP will not enforce its intellectual property rights on smallholder farmers, who will be free to exchange or sell small amounts of the new variety to support their food security and livelihoods. CIP-Matilde is also being shared with other organizations globally under the International Treaty for Plant Genetic Resources for Food and Agriculture’s Multilateral System, to ensure its availability in accordance with the treaty.

CIP-Matilde should greatly benefit small farmers in the Junin and Huancavelica regions, where it was evaluated by and met the demands of local men and women. To ensure production and dissemination of enough seed of the new variety, CIP will use a strategy developed by the CGIAR Research Program on Roots, Tubers and Bananas, in collaboration with local partners.

Latin America
Potatoes
This site uses cookies. By clicking "I agree" and continuing to use this site you agree to our use of cookies. CIP PRIVACY STATEMENT