The Africa Green Revolution Forum (AGRF 2018)— a conference hosted by the Alliance for a Green Revolution in Africa (AGRA) with partners—recently concluded with ambitious commitments to deliver billions of dollars in new investments to African smallholder farmers  and agribusinesses especially targeting women and youth.

The annual forum held from 5th through 8th September in Kigali, Rwanda brought together 2800 delegates from 79 countries and high-level dignitaries providing a global platform for discussions to tap into the enormous potential of agriculture to drive sustainable economic growth across Africa. Two Presidents (Rwanda and Ghana) and Kenya’s Vice President participated in a presidential debate, part of the closing session, moderated by Rt. Hon. Tony Blair, former Prime Minister of the United Kingdom. Among other issues, the leaders agreed on the need to exploit agricultural trade opportunities available within the continent first as opposed to focusing on European markets that are increasingly difficult to exploit.

The International Potato Center (CIP) participated in the forum, joining the conversation along the theme: Lead. Measure. Grow. Sharing key lessons from CIP work on potato and sweetpotato value chains in the region, scientists unpacked critical issues central to transforming the lives of smallholder farmers. CIP’s work in Africa is made possible thanks to support from a number of donors including UKAid, Bill and Melinda Gates Foundation, USAID and Irish Aid among others. 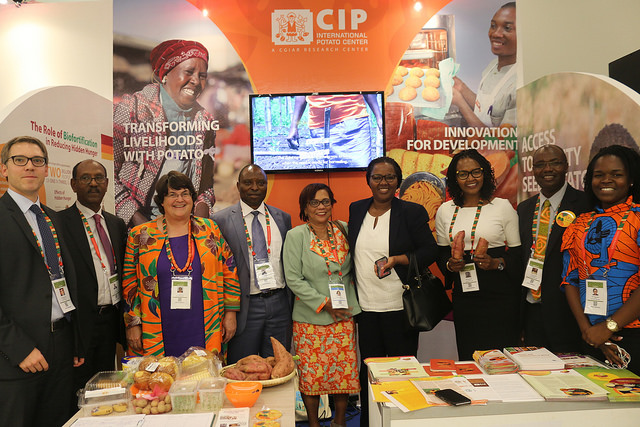 H.E. Geraldine Mukeshimana, Minister for Agriculture and Animal Resources, Republic of Rwanda (fourth from right), Fabian Lange and Tesfai Tecle (L-R) from the Kofi Annan Foundation pose with the CIP team at the AGRF 2018.

As a panel discussant during a session on Healthy Diets-Reality to Aspiration, Dr. Low – Principal Scientist at CIP told the audience breeding for improved quality and micronutrients in staple food such as sweetpotato was key. “Give equal weighting to breeding for improved nutrition and for disease and pest resistance”, she said.

On the topic of a green revolution for Africa, Low, who spoke on AGRF TV, called for a diversified approach where vegetables, fruits and healthy roots and tubers like pro-vitamin A OFSP are given attention just like staples such as maize. “We want to reach stakeholders with the message that OFSP can be integrated into all agro-ecological systems in the continent.  Agriculture and nutrition must work together for quality diets for Africa”, said Low. 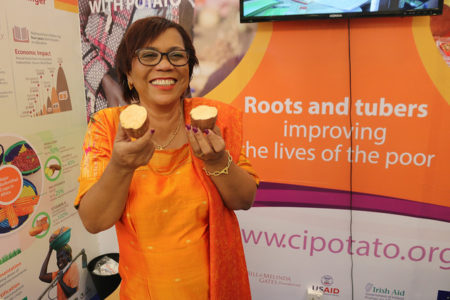 She highlighted her work on breeding OFSP for Mozambique’s vulnerable women and children. Dr. Andrade has released 30 bio-fortified sweetpotato varieties of which 20 are drought tolerant. Also, the team in Mozambique has been working hard on OFSP “value-chain” approaches which incorporate both socio-market and agro-processing strategies to ensure a sustainable program for the long term to address food insecurity, malnutrition, and income generation, especially among women.

On potato production, CIP Regional Director for Africa Dr. Paul Demo shared insights on increased production and opportunities in Africa.  He highlighted collaborations with national research institutes that have led to release of improved varieties that are high yielding and preferred for purposes such as home consumption and processing.

“We must use technology (such as improved varieties) to intensify production in order to harvest more per unit land area as opposed to expanding the area under cultivation”, noted Demo during an interview on CBNC Africa, held within the sidelines of the AGRF.

Showcasing innovations in potato and sweetpotato

CIP’s exhibition at the AGRF was strategically placed attracting development partners, ministers for agriculture from Africa as well as government officials, scientists and farmers, who visited the booth to learn more about work in the region. They tasted delicious OFSP bakery products from Rwanda and Kenya made by substituting wheat flour with between 35 – 40 percent OFSP puree; an approach that could significantly reduce wheat imports if scaled up.  More than 300 participants visited the booth over a period of three days interacting with the CIP team to not only learn about CIP-led initiatives, but also establish networks for future collaborations. Kenyan renowned media personality and AGRF moderator Jeff Koinange visited the CIP booth further promoting CIP initiatives through his twitter account that boosts of 1.32 million followers from various parts of the world.

Somebody say Potato, Potato!! Or is it Ngwache! Spread THE WORD! It’s all happening at the #AGRF2018 inside the #KigaliConventionCentre under the theme #LeadMeasureGrow!! @Cipotato https://t.co/wBlOgZkzbI

Learning from successes in Rwanda

Dr. Kirimi Sindi, CIP senior scientist and country manager for Rwanda, highlighted factors that have contributed to the growth of Rwanda’s sweetpotato sector. Such factors included flexible seed regulations that allowed seed multipliers to ply their trade without restrictions. Dr. 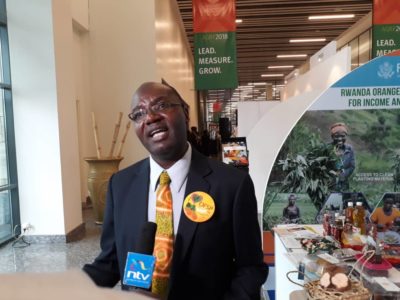 Dr. Kirimi Sindi during an interview with NTV Kenya. Watch this interview here.

Sindi further highlighted that Rwanda and Tanzania had policies that allowed farmers to grow quality declared planting materials, so that they can multiply and sell the seeds without a requirement to produce certificates or licenses.

“When we started engaging local farmers to grow OFSP, farmers here were managing three to five tonnes per hectare. Today, after training them and giving them high quality planting materials they are able to get up to 12-17 tonnes per hectare on average even without using fertiliser,” reported Sindi during an interview with the Kenyan Daily Nation newspaper.

View pictures from AGRF in our photo album on Flickr.