Potato Experts from around the Globe Gather in Cusco, Peru

More than 800 potato scientists, industry representatives, government officials and other interested parties from 50 countries gathered in the Andean city of Cusco, Peru for the 10th World Potato Congress (WPC) and the 28th Congress of the Latin American Potato Association (ALAP), held from May 27 to 31. The event, which included ample participation by scientists from the International Potato Center (CIP), raised the potato’s profile in Peru and beyond by highlighting the crop’s rich biodiversity and its potential for reducing hunger, malnutrition and poverty.

The WPC is the most important international event for potato science and business, held in a different country every three years. WPC 2018 marked the first time that the Congress took place in Latin America. And because this WPC was held in parallel with the 28th ALAP Congress, it constituted an unprecedented international convergence of potato experts and an opportunity for people from the research, development and business sectors around the world to share knowledge and network.

In his address to participants, Peru’s Minister of Agriculture and Irrigation, Gustavo Mostajo, noted that the decision to hold the event in Cusco was due to the fact that it lies in the potato’s center of origin, near where potatoes were first domesticated almost 10,000 years ago, and where most of the world’s potato biodiversity is found.

“This will be an opportunity for Latin American researchers – in one great event – to learn about the latest advances in potato science and businesses in different geographical contexts around the world,” he said. 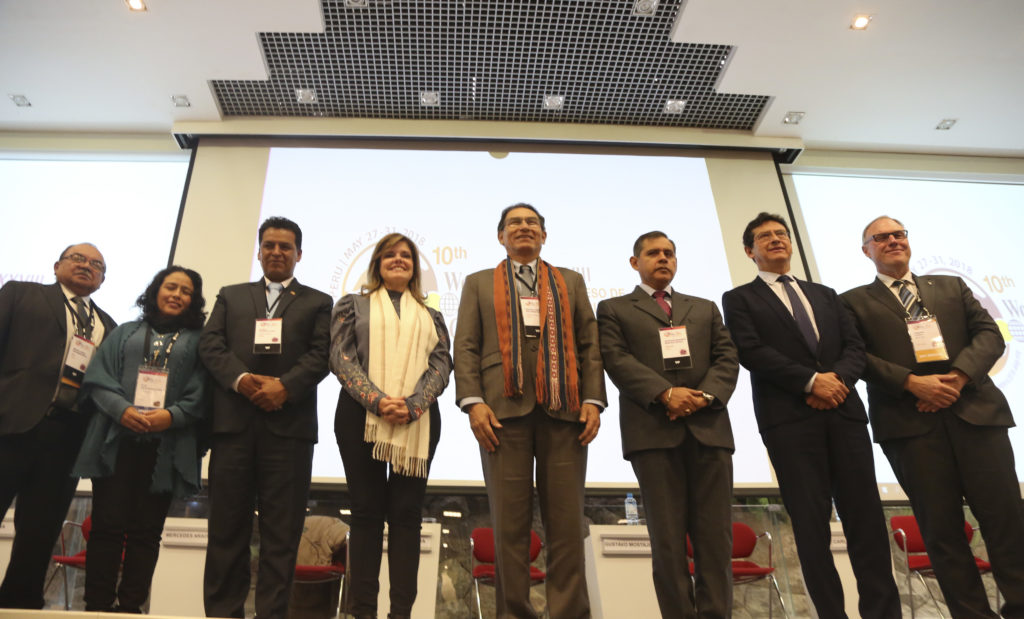 WPC 2018 was inaugurated Monday morning by the President of Peru, Martin Vizcarra, who noted that more than 10 percent of his country’s population depends on potato, but that most of them lead lives of subsistence. He expressed his hope that the knowledge shared during the three-day event will contribute to his country’s goal that “the potato serves to not only to alleviate hunger, but also to generate progress and development for farmers, no matter how small they are.”

In a plenary presentation, CIP’s Director General, Dr. Barbara Wells, described the extent and impacts of hunger and micronutrient deficiencies globally, and the challenges that farmers in the developing world face to grow enough food and earn a decent living. She warned that the challenges of feeding the world and reducing malnutrition will grow over the next three decades, as the world’s population approaches 10 billion and climate change threatens agriculture in many regions. However, she also cited improvements in potato breeding, seed systems, agronomic practices and other areas that can help the global community meet those challenges. 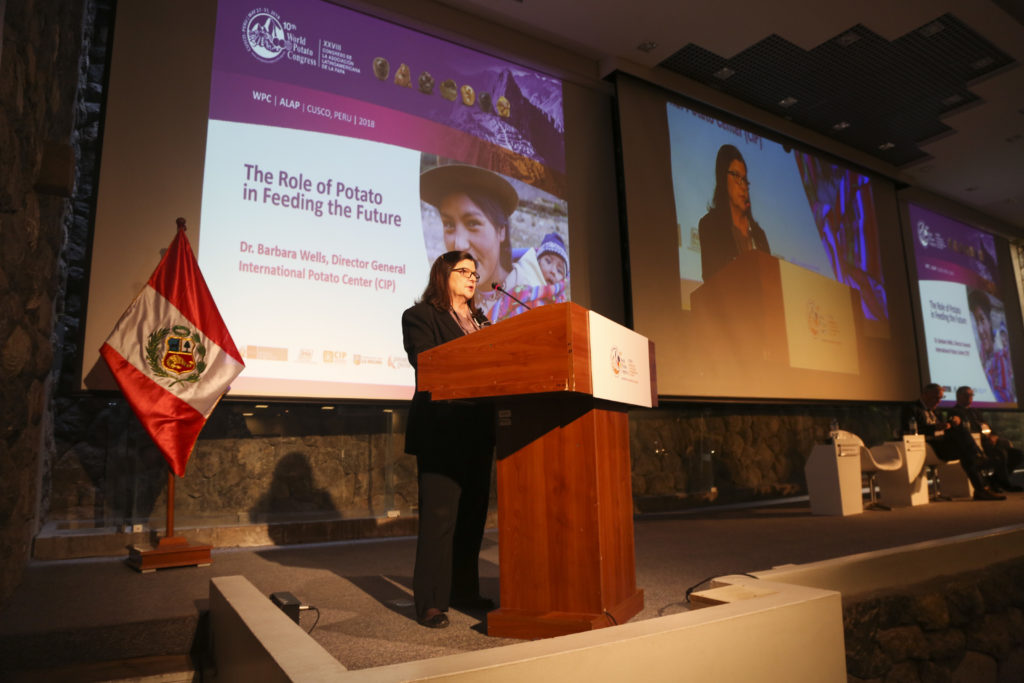 “More than one billion people eat potatoes, the crop’s potential for strengthening food security, diets and incomes has yet to be fully exploited,” Wells said.

She explained that while potatoes are already a good source of carbohydrates, vitamin C, iron and zinc, CIP scientists in Peru have spent the past decade crossing native potatoes with high iron and zinc content to breed biofortified potatoes – with double the original levels of those micronutrients. These efforts will contribute to reducing malnutrition and anemia in several countries in the coming years.

In addition to plenary presentations and technical sessions on subjects ranging from climate change’s implications for potato farming to trends in potato consumption, the first day of WPC 2018 included a regional meeting of ministers and other high-level representatives from the Ministries of Agriculture of Peru, Ecuador, Colombia and Bolivia. CIP agricultural economists André Devaux, Miguel Ordinola and Guy Hareau gave a presentation to the ministers about the use of native potato biodiversity to improve food security and smallholder incomes in Peru over the past decade, during which time sales of native potatoes increased by more than 70 percent, and market prices for them, by 150 percent. The meeting resulted in the ministers signing a regional agreement that includes measures to strengthen the conservation and sustainable use of native potato biodiversity across the Andes region.

Researchers and business representatives participating in WPC 2018 and the ALAP Congress had the opportunity to participate in technical sessions on an array of innovations that included potato variety development and biotechnology, improved pest and disease management, crop management and the importance of potato biodiversity for breeding and nutrition. They also had opportunities to enjoy the cultural and culinary attractions of Cusco, the former capital of the Incan empire and a major Spanish colonial center, where the abundant restaurants in historic buildings serve native potatoes in an impressive array of recipes.

As Dr. Miguel Barandiarán, the Head of the National Institute of Agricultural Innovation (INIA) pointed out during his inauguration address: “Cusco is one of a kind.”

WPC 2018 was organized by INIA, which is part of Peru’s Ministry of Agriculture and Irrigation, in collaboration with CIP, the National Agrarian University La Molina, the Ministry of Foreign Trade and Tourism and the Peru country office of the Food and Agriculutre Organization.