Food insecurity and malnutrition are major challenges in Eswatini. Despite its favorable climate and fertile soils, the country is a net importer of nearly all crops and livestock commodities, while malnutrition affects 26% of children in the country. To combat rising food prices and climate change impacts, the government is committed to enhancing food security and self-sufficiency through increased agricultural productivity, crop diversification and commercialization of smallholder agriculture. Nutritionsensitive agriculture is being encouraged to address malnutrition concerns.

Roots crops, such as cassava, potato and sweetpotato can play a key role in improving food security, incomes and nutrition among smallholder farmers. Sweetpotato is easy to grow, matures quickly, requires minimum external inputs, and exhibits strong tolerance to drought, making it an ideal crop to fill the hunger gap before the staple maize harvest. However, at present, sweetpotato farmers predominantly grow white-fleshed varieties while biofortified orangefleshed sweetpotato (OFSP) varieties that are rich in vitamin A are not yet available in the country.

The overall goal is to contribute to improved incomes, and food and nutrition security for smallholder farmers through production and consumption of nutritious biofortified OFSP varieties. To achieve this goal, the project will pursue the following objectives:

The project is being implemented through a tripartite partnership with CIP, SMLP and DARSS. CIP will provide the technical support while DARSS leads the participatory variety evaluation to identify locally-adapted, farmer preferred varieties for official release. As part of the evaluation process, on-station and on-farm trials will be established, the latter of which will be hosted at SMLP target sites. SMLP will lead the mobilization of farmers, local agriculture extension agents, and home economics staff to participate in the varietal evaluation process.

To ensure that the newly-released varieties are accessible to farmers, the project will strengthen the capacity of DARSS to produce high-quality foundation seed. Additionally, decentralized farmer vine multipliers will be established and trained in vine multiplication techniques to further multiply quality seed for dissemination. Diverse household use of OFSP will be promoted by leveraging SMLP’s strong partnership with the Eswatini Nutrition Council and Home Economics Department.

To date, the project has introduced 10 OFSP varieties in Eswatini while DARSS (with technical support from CIP) has established trials at three stations to evaluate these varieties along with local varieties already in use.

During field days (held at trial sites) participants conducted agronomic and sensory evaluation of the varieties. The data collected on field days will be combined with data from second season trials conducted on-station and on-farm during the 2020-2021 season. The data will become the basis for recommending varieties for official release. At least two varieties are expected to be officially released by November 2021.

A greenhouse has been constructed at Malkerns station to facilitate maintenance of OFSP germplasm and production of clean foundation material. 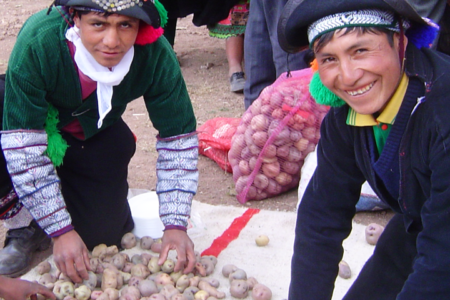 Evaluating iron and zinc bioavailability in biofortified potatoes to reduce malnutrition in the Andes
This site uses cookies. By clicking "I agree" and continuing to use this site you agree to our use of cookies. CIP PRIVACY STATEMENT