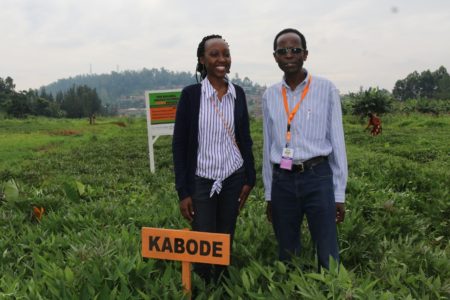 Paola Giriwanyu is a 22 year old  fresh graduate with an agribusiness degree from the University of Rwanda.

As a young girl, Paola grew up in Kigali city and was not exposed to farming as a food production or income generating activity. She however still had an interest in farming thus her pursuit of an agricultural science degree at the university.  In 2016, she secured an internship placement with the International Potato Center (CIP) in Kigali, Rwanda, for six months. During this period, she learnt about the potential of sweetpotato both for nutrition purposes as well as a business activity.

“I learnt that orange-fleshed sweetpotato (OFSP) is excellent for good vision because of the vitamin A it contains, and it can help poor people improve their health and make money. Because of this I hurried to apply for marshland in Kigali City to mine the orange gold” Paola, said.

During her internship, Paola had learnt that OFSP contains beta-carotene which the body converts to vitamin A. It is the vitamin A which enables people to have good vision and ward off numerous diseases, preventing deaths in children below six years. More information on the nutrition benefits of OFSP can be found in this article.

Paola was successful in her application and the Kigali City Authority allocated her 0.7 hectare of marshland—mostly low-lying wetland. Such marshland is suitable for production of sweetpotato vines especially during the dry season.

She quickly went into action; preparing the land and planting it with the most popular OFSP variety in Rwanda called Kabode. In Uganda where Kabode was bred and named , it means a well-built muscular heavy weight individual capable of lifting heavy weights, alluding to the heath it gives when you consume it.

Paola has an attractive signpost at her  plot reading, “The Rwanda orange-fleshed sweetpotato for income and nutrition activity”. The signpost also has her telephone number to call if you want to buy vine cuttings. She sells vine cuttings to farmers, non-government organizations, and other organizations such as CIP which work with farmers. She is determined to change her life and that of others through this business. She uses WhatsApp groups, through her mobile phone, to monitor the market for vine cuttings. Paola obtains clean planting material, free from fungal and viral diseases, from the Rwanda Agriculture and Animal Resources Development Board.

Paola likes what she does because it has changed her life economically and given her a viable income generating activity. In December 2017, she sold four tonnes of OFSP vines earning Rwf 500, 000 (USD 570) in one planting season. She is happy that she is actively engaged in the production of quality OFSP and through this she is contributing to saving lives and lifting people out of poverty. She plans to expand her business by acquiring more land and diversifying her enterprise to include horticultural crops such as onions and cabbages which are in constant high demand in the city.

“I hope the diversification of my enterprise will  help to mitigate the risk of being out of business in case the demand for vine cuttings drops. For now demand for Kabode remains high”, she concludes with a smile.

africa, Agriculture, cip, farmers, OFSP Vines, Rwanda, Youth
Menu
This site uses cookies. By clicking "I agree" and continuing to use this site you agree to our use of cookies. CIP PRIVACY STATEMENT
I agree