The words, “Hail Regina Kapinga, Queen of the RTB,” rang out at the announcement of her ‘Appreciation award for outstanding leadership and contribution to the development of Root and Tuber crops in Africa.’  The award ceremony was held on 10 March 2017 at a dinner and cultural night, to officially close the International Symposium for the International Society for Tropical Root Crops- Africa Branch (ISTRC-AB), held in Dar es Salaam, Tanzania from 6-10 March.

As she walked to the podium, a collection of staff from the International Potato Center (CIP), led by Jan Low, recited the poem, narrating Kapinga’s career path in a few clear lines. Kapinga is a smallholder farmer’s daughter, born on the shores of Lake Victoria, in Bukoba district in the North-western zone of Tanzania.  She holds a PhD in Agronomy (1994) and an MSc in Crop Science (1988) from the University of Ibadan, Nigeria. She obtained her BSc (major in Botany and Chemistry, 1984) at the University of Dar es Salaam, Tanzania.

Her career spans over three decades. For sixteen years, she worked as a Root Crops Research Scientist and National Coordinator for Root and Tuber Crops Improvement Program at the Ministry of Agriculture, Food Security and Cooperatives, Mwanza, Tanzania. After a brief stint as the Director of Research Coordination and Promotion at the Tanzania Commission for Science and Technology (COSTECH), she joined the International Potato Center (CIP), where she worked as the Sweetpotato Breeder for sub-Saharan Africa and Partnership Program Coordinator for the Vitamin A for Africa (VITAA) initiative from 2001 to 2008.

Having trained as a cassava agronomist, Kapinga had discovered the beauty of sweetpotato, and she dedicated many years to promoting research and adoption of the crop. She, along with Jan Low, and Maria Andrade, the 2016 World Food Prize laureates, made a mark, their commitment to promoting orange-fleshed sweetpotato (OFSP) was apparent in everything they did, including the clothes they wore. They became known as the Ladies in Orange.

VITAA was a partnership promoting the increased production and utilization of OFSP to combat vitamin A deficiency in eastern, central and southern Africa. The aim was to make OFSP available on a large-scale, demonstrating the potential of crop-based approaches in alleviating micronutrient deficiency. Project activities included participatory testing of varieties for adaptation and acceptability, community-based multiplication of planting materials, nutrition education, post-harvest processing for market and for home consumption, promotion through social marketing, monitoring of impact on nutrition and health, and capacity building.

As the Partnership Program Coordinator, Kapinga was the CIP representative on the VITAA platform and played an important role in bringing together national agricultural research institutes, health and nutrition agencies, NGOs, community-based organizations (CBOs) and private businesses to promote OFSP. The platform addressed issues across the entire value chain for OFSP.  Low remarks, “She was a leader in the area of OFSP promotion in East Africa during the days when there was little funding for this work. She attracted dedicated members of the sweetpotato community like Dr.Fina Opio from the National Agricultural Research Organization of Uganda to effectively chair the platform in its first phase and participate on the advisory committee.”

Low recalls that Kapinga believed in the power of getting schools and school children involved in consuming OFSP and disseminating them to their own homes.  She inspired many teachers to get involved in this effort. During her tenure, the platform rose from seven to eleven countries. The VITAA partnership program won the 2003 CGIAR outstanding partnership award and an award from the Global ISTRC Society in 2006 at the 14th Triennial Symposium held in Kerala, India for its efforts in promoting OFSP.

In 2009, Kapinga moved to the Bill & Melinda Gates Foundation in Washington, United States, where she continued to promote RTB through helping to design and manage investments in key areas of RTB research and dissemination. Today, Kapinga is the Head of Advocacy and Resource Mobilization at the International Institute for Tropical Agriculture (IITA), where she is engaging with national stakeholders, private sector, donors and other development partners to increase investments in RTBs and other commodities. 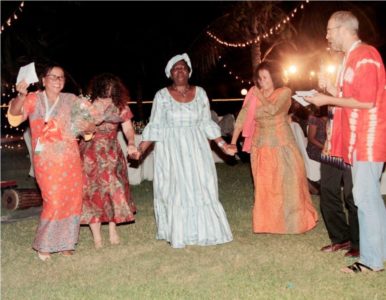 She may have extended her scope to other RTB crops, but for CIP, Kapinga remains one of the Ladies in Orange, a member of the team of dedicated scientists who built the evidence-base for biofortification, and OFSP as a viable food-based approach to combating Vitamin A deficiency.  As Andrade and Low were joined by other CIP scientists to recite, “Our sister in orange… Regina Kapinga. Dada (sister) Regina led the vitamin A for Africa Campaign,” they once again relived the memories of shared struggle fought and won, and revelled in the recognition of their joint efforts.  At the same ceremony, CIP scientist Maria Andrade also received the equivalent recognition for her work on orange-fleshed sweetpotato and service to the Africa branch of the ISTRC.  So the group had double reasons to celebrate!