The International Potato Center (CIP) hosted a reception to mark 45 years of research for development, 37 of these being in Africa.  The event was held on 9th October 2016, the eve of the 10th triennial African Potato Association (APA) conference, at the Elilly Hotel in Addis Ababa, Ethiopia. 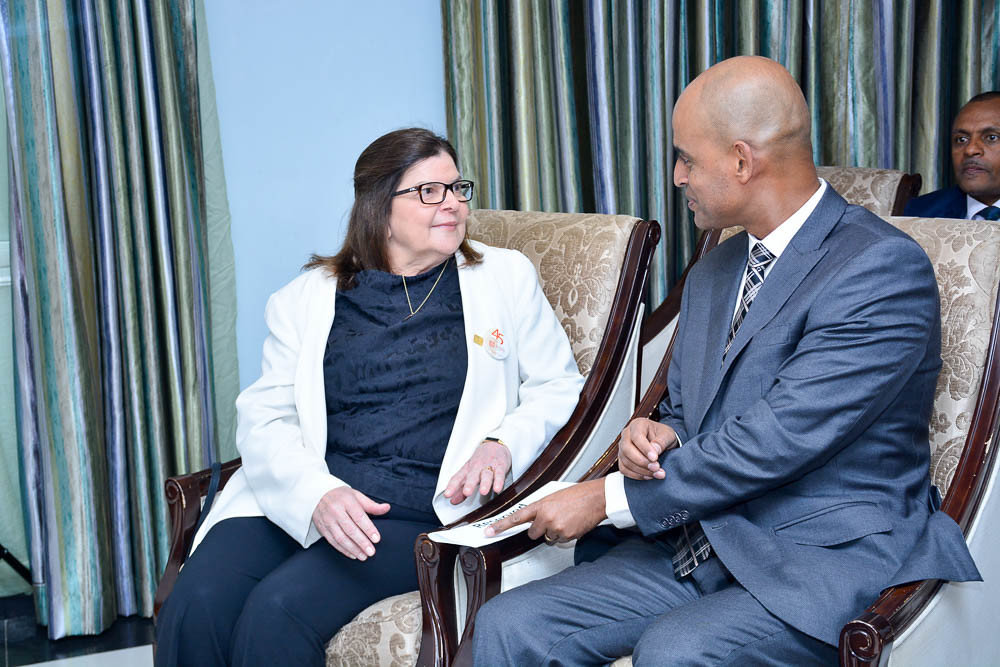 In her welcome remarks, Dr. Wells, acknowledged the crucial role that partners had played in enabling CIP attain its mission on improving the lives of the poor through research for development on roots and tubers.  A key aspect of this has been promoting breeding efforts in Africa through National Agriculture Research Institutes (NARIs) such the EIAR.

Representing the Government of Ethiopia, H.E. Ato Wondirad Mandefro noted that collaboration with CIP begun over 30 years ago with screening varieties of potato and sweetpotato for high yields, disease and pest resistance.  “This collaborative effort resulted in the release of over 35 potato varieties. For sweetpotato, initial screening focused on yield and resistance to viruses. With time this shifted to include high beta-carotene containing varieties called orange-fleshed sweetpotatoes (OFSP). These will alleviate the high vitamin A deficiency existing in Ethiopia among children and lactating and pregnant women”, said Mandefro.

CIP continues to celebrate the work of laureates ¾Drs Jan Low, Maria Andrade and Robert Mwanga  (CIP) and Howarth Bouis (HarvestPlus) ¾ who received the 2016 World Food Prize in recognition of their work on biofortified crops especially OFSP and its role in reducing hidden hunger and specifically vitamin A deficiency in SSA. The laureates received acknowledgment and congratulatory messages during the reception.  Moreover, Dr. Low participated in a panel session to highlight CIPs rich and diverse history.

Read more about the work of the laureates here. Watch a recording of the panel session here

The event ended with closing remarks from Dr. Ortiz with assurances to take CIP’s work in Africa and the world to the next level to address the prevailing challenges—growing population, shrinking land and climate change.  “We know that we cannot shoulder this alone. The challenges are too great and the risks are too large. We will look to partners like those of you in the audience today from governments around the world to civil society to universities and the private sector and farmer organizations”, concluded Dr. Ortiz.

In 2016, CIP is holding a series of events to celebrate 45 years of research for development.  Read about celebrations held in Lima Peru in September: https://cipotato.org/events/45anniversarycelebration/

View photos of the Addis Ababa anniversary celebrations on Flickr