The inclusion of Orange Fleshed Sweetpotato (OFSP) in wheat bread and school meals is boosting the nutritional status of children in Nigeria while helping smallholder farmers generate income for improved livelihoods.

Developed by the International Potato Center (abbreviated by Spanish acronym CIP) and partners, the OFSP varieties in Nigeria namely Mothers Delight and King J, are rich in Vitamin A—a critical vitamin that is deficient in most diets in sub Saharan Africa, and remains a serious public health problem in Ghana, Nigeria, and Burkina Faso in West Africa. In Nigeria, one in three children suffer from Vitamin A deficiency (VAD)—which can lead to blindness and even death.

In the last three years, CIP pioneered a three-year project in Osun and Kwara States of Nigeria, with funding from Bill & Melinda Gates Foundation. In Osun State, the project intervention entails inclusion of OFSP in school meals as part of efforts to improve the nutrition of children. Working closely with the National Root Crops Research Institute (NRCRI), select farmers received clean OFSP planting material preceded by training on vine multiplication and root production.  The project also trained bakers on the inclusion of 40 percent OFSP puree (steamed OFSP) in wheat bread.

With the project winding up this quarter of 2017, CIP organized a media visit on May  17 to document and share the successes of the project in Nigeria and beyond. 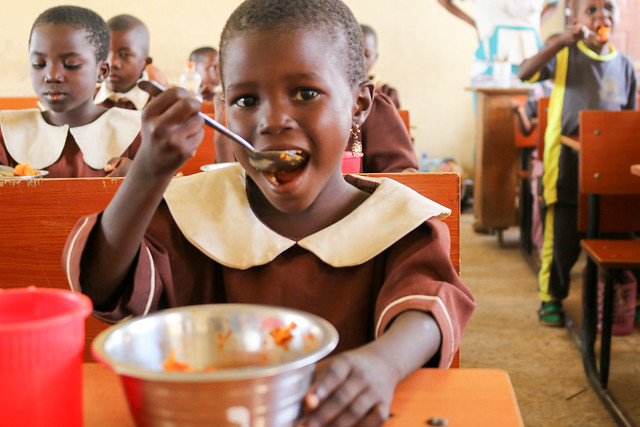 Media reports following the visit are as follows:

Sci Dev.Net, the world’s leading source of reliable and authoritative news, views and analysis on information about science and technology for global development reported: Nigerian schools adopt sweetpotato to boost nutrition. Based on interviews by stakeholders, Sci Dev reports that “more than 41,216 school children are now consuming OFSP weekly”.

Nigeria Television Authority  (NTA),  a state owned  broadcaster  reported during a news broadcast how OFSP is transforming the Osun economy through both formal and informal markets with a tremendous impact on the state run school feeding program. Mrs. Olubunmi Ayoola who is in charge of the Osun Elementary School Feeding and Health Programme (O’MEAL) noted that children enjoy OFSP served at least once per week for lunch. Multiplier effects are reflected in enrolment figures and wellness of the pupils.

TVC News, Ibrahim Alegeh interviewed Ademola Adepoju a decentralized vine multiplier and root supplier who farms OFSP on his two-and-a-half-acre piece of land for the last three years. He grows the Mothers Delight OFSP variety that matures in two and half months as opposed to local varieties that take up to four and a half months.  TVC News is Africa’s First Pan African News Channel located in the heart of Lagos, Nigeria with Bureaus across Africa, London and the United States. Watch this broadcast here.

Osun School Feeding as an example of a successful program that needs to be emulated by other states.   The paper quotes Mrs Ayoola:

“We started with eight schools, but now it has expanded to 186 schools, covering over 17,000 pupils. Aside its nutritive advantages, it improves eye sight and good for diabetics. It is economical, its leaves can be used for producing drinks, and can also be used in bread production.” She called on other states that are into the programme to introduce the new potato to save cost, address Vitamin A deficiency, and encourage farmers to cultivate what she termed a “wonder crop.”

Other media published  a press release circulated by CIP as follows: