Accelerating potato and sweetpotato’s contribution to ending hunger and malnutrition

In 2015, the world’s leaders adopted an agenda for a better future based on 17 Sustainable Development Goals (SDGs), to be achieved by 2030. The United Nations 2030 Agenda for Sustainable Development offers a blueprint for achieving the SDGs, which include the eradication of poverty, hunger and malnutrition. However, many countries aren’t on track to reach them by 2030, according to a recent review of food security and nutrition in the world.

As part of the International Potato Center’s (CIP) efforts to achieve the SDGs, CIP scientists will join decision makers, donors, researchers and practitioners from around the world at a global event called Accelerating the End of Hunger and Malnutrition, which takes place in Bangkok, Thailand on November 28-30, 2018. Organized by the Food and Agriculture Organization of the United Nations (FAO) and the International Food Policy Research Institute (IFPRI), the conference will address the challenges of transforming food systems for the benefit of the hungry and malnourished.

The event is an opportunity for organizations to share evidence and lessons learned from around the world on reducing hunger and malnutrition; explore innovations to build further momentum and accelerate progress; and identify opportunities for scaling successful actions. An Acceleration Fair and side events will take place concurrently with the main conference, and will feature new research and program initiatives, tools, methodologies and approaches to accelerate the eradication of hunger and malnutrition.

Dr. Simon Heck, Resilient Nutritious Sweetpotato Program Leader at CIP, will share progress and lessons learnt from CIP’s work with potato and sweetpotato. CIP collaborates with an array of partners on several continents to enhance access to those crops, foster inclusive, sustainable business and employment growth, and improve farmers’ climate resilience. These efforts have resulted in the release of dozens of nutritious and resilient potato and sweetpotato varieties in recent years, as well as the development of systems to get quality planting material for those varieties to the farmers who need them, and value chain innovations that have created opportunities for men, women and youth.

This includes a seed system and agronomic training initiative that had expanded the availability of quality seed potatoes to more than 480,000 small-scale potato farmers in sub-Saharan Africa by mid 2017, providing opportunities for poor families to improve their potato production, incomes and diets. Potato produces more calories per hectare than major grains and contains half the daily requirement of vitamin C, as well as significant amounts of vitamin B, iron, potassium and zinc.

A wider multi-donor, multi-partner initiative has expanded the cultivation and consumption of orange-fleshed sweetpotato  (OFSP) as part of an effort to reduce the incidence of vitamin A deficiency (VAD), which causes childhood blindness and a host of other health problems in developing nations. In sub Saharan Africa alone, more than 40% of children under ﬁve suﬀer from VAD.

Just 125g of fresh sweetpotato roots from most orange-fleshed varieties contain enough beta-carotene to provide the daily pro-vitamin A needs of a preschooler. By enhancing the development of resilient varieties and seed systems, providing agronomic and nutrition training to farmers and facilitating the creation of new value chains, CIP and its many partners in 15 African countries had reached 5.3 million households with that nutritious crop by June of 2018.

Learn more about the attributes of potato and sweetpotato from the following poster that will be exhibited at the event: 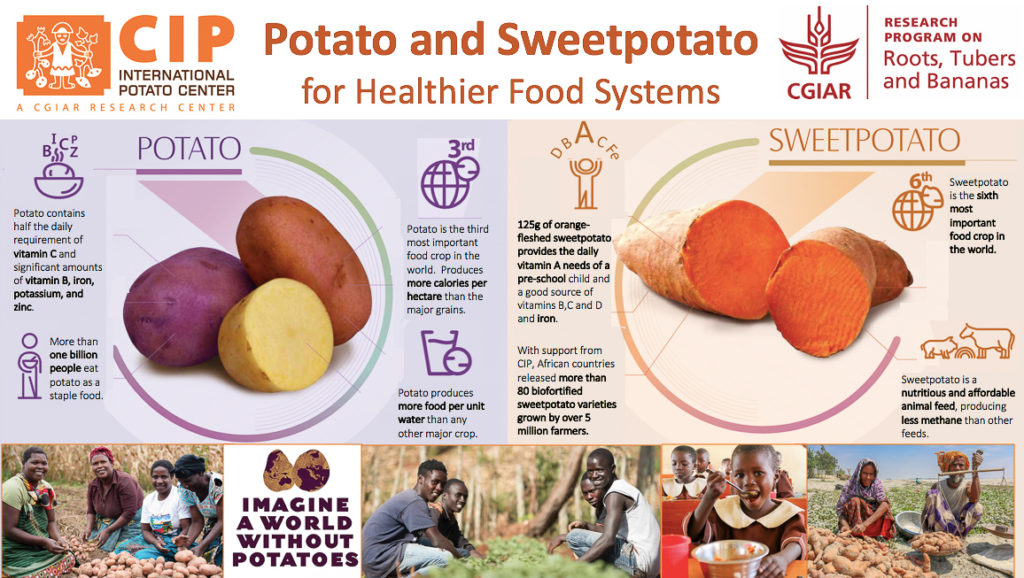 Download this poster on CGSPACE: Potato and sweetpotato for healthier food systems

The forum has been organized by the International Food Policy Research Institute (IFPRI) and the Food and Agriculture Organization of the United Nations (FAO). For more information, please visit www.ifpri-faobangkokconference.org.