There are over 4,000 edible varieties of potato, mostly found in the Andes of South America. Potato is the third most important food crop in the world after rice and wheat in terms of human consumption. More than a billion people worldwide eat potato, and global total crop production exceeds 300 million metric tons. Potato is a critical crop in terms of food security in the face of population growth and increased hunger rates. For example, China, the world’s biggest consumer of potatoes, expects that fully 50% of the increased food production it will need to meet demand in the next 20 years will come from potatoes. The potato (Solanum tuberosum) belongs to the solanaceae family of flowering plants. It originated and was first domesticated in the Andes mountains of South America.The potato is the third most important food crop in the world after rice and wheat in terms of human consumption. More than a billion people worldwide eat potato, and global total crop Production exceeds 374 million metric tons. There are more than 4,500 varieties of native potatoes, mostly found in the Andes. They come in many sizes and shapes. There are also between 100-180 wild potato species. Though they are too bitter to eat, their important biodiversity includes natural resistances to pests, diseases, and climatic conditions. The potato (Solanum tuberosum) is an herbaceous annual that grows up to 100 cm (40 inches) tall. As the potato plant grows, its compound leaves manufacture starch that is transferred to the ends of its underground stems (or stolons). The stems thicken to form a few or as many as 20 tubers close to the soil surface. The number of tubers that actually reach maturity depends on available moisture and soil nutrients. Tubers may vary in shape and size, and normally weigh up to 300 g (10.5 oz) each. At the end of the growing season, the plant’s leaves and stems die down to the soil level and its new tubers detach from their stolons. The tubers then serve as a nutrient store that allows the plant to survive the cold and later regrow and reproduce. Each tuber has from two to as many as 10 buds (or “eyes”), arranged in a spiral pattern around its surface. The buds generate shoots that grow into new plants when conditions are again favorable. Potatoes are an excellent, low-fat source of carbohydrates, with one-fourth the calories of bread. Boiled, they have more protein than maize and nearly twice the calcium. An average serving of potatoes with the skin on provides about 10 percent of the recommended daily intake of fiber. Over 4,000 varieties of native potatoes grow in the Andean highlands of Peru, Boliva, and Ecuador. Selected over centuries for their taste, texture, shape and color, these potato varieties are very well adapted to the harsh conditions that prevail in the high Andes, at altitudes ranging from 3,500 to 4,200 meters. Farmers generally produce these native varieties with minimal or no use of agrochemicals. Diversity is conserved on farms and in communities for subsistence use and as a highly valued heritage. Most of these varieties never see a market; they are traded among highland and lowland communities and given as gifts for weddings and other occasions. The varieties differ from community to community. 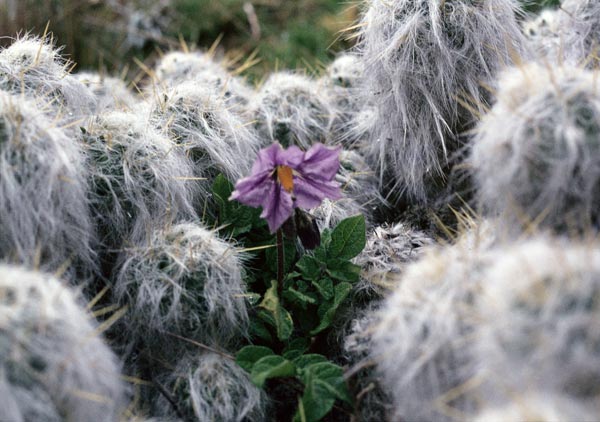 There are between 100-180 known species of wild potato. These inedible species are the original ancestors of today’s cultivated potato. Wild species are found from southwestern United States to southern Chile, with most species concentrated in Peru and Bolivia. They grow in diverse soils and climates, from the dry desert along the Peruvian coast, to the inter-Andean valleys, up to altitudes of 4,200 meters above sea level.

Potatoes are used for a variety of purposes, and not only as a vegetable for cooking at home. In fact, it is likely that less than 50 percent of potatoes grown worldwide are consumed fresh. The rest are processed into potato food products and food ingredients; fed to cattle, pigs, and chickens; processed into starch for industry; and re-used as seed tubers for growing the next season’s potato crop.