Ambassador Kenneth Quinn on the challenge of feeding 9 billion people 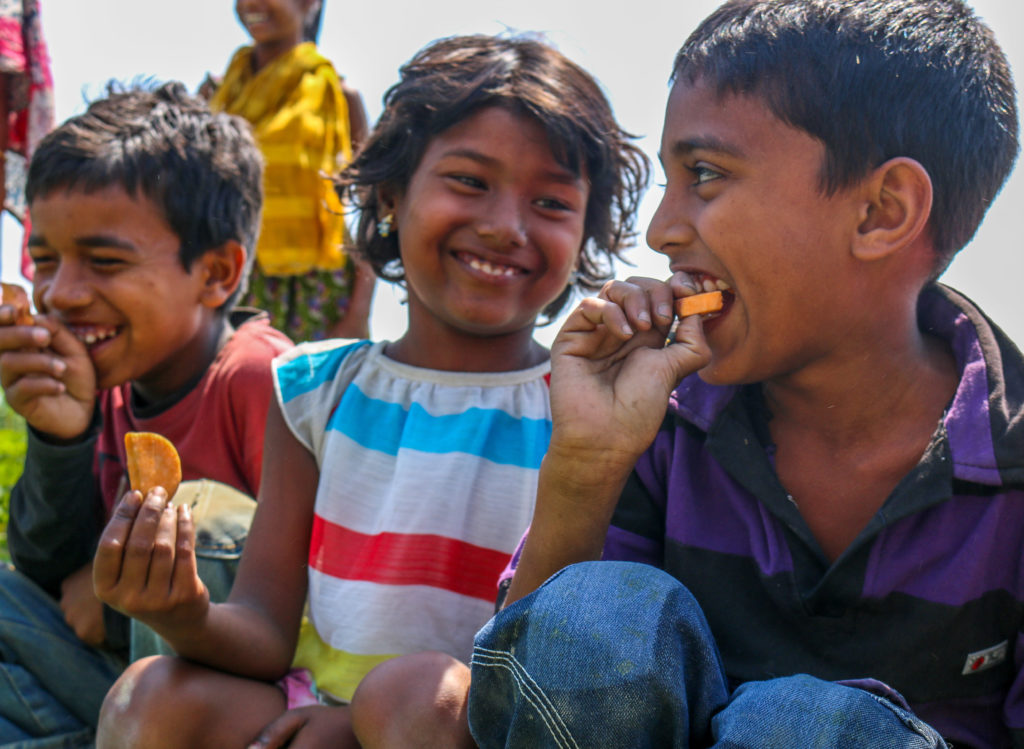 Children snack on freshly picked orange-fleshed sweetpotato in Bangladesh. The International Potato Center works to develop biofortified varieties that can grow in extreme conditions and deliver a hefty dose of betacarotene to protect children from vitamin A deficiency. Photo: Sara Quinn/CIP

Booming population growth in the face of climate change is putting undue pressures on the world’s resources and ability to produce enough food to feed a hungry planet. World Food Prize president, Ambassador Kenneth M. Quinn, shares insights on the state of global food security and the role of science and agricultural innovation in achieving zero hunger and zero malnutrition.

What first inspired you to begin championing global food security? 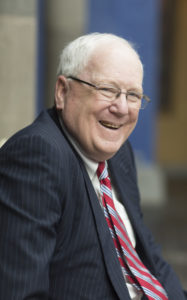 Ambassador Kenneth Quinn, president of the World Food Prize, has dedicated his life to ending hunger and malnutrition. Photo: CIP

I had an unusual diplomatic career where I ended up working out with farmers in rural areas, and I saw how farmers work and how close to the margin it is. If you can bring in agricultural technology technologies, like enhanced potatoes, the farmers produce food more efficiently and increase their incomes; it changes everything.

I saw this in the Mekong Valley of Vietnam during the war. I’ve seen it in Africa. Wherever farmers have a new improved road and that new agriculture technology, such as those developed at the International Potato Center (CIP), it can be the key to uplifting people out of poverty.

It can happen very quickly. With the challenges of climate change—drought, floods, rising sea levels—we have to produce 60 percent more food in the next 30 years. This is the greatest single challenge that human beings have ever faced, and we can only do it with innovation.

What other factors influence food security?

I was a foot soldier in the green revolution when miracle rice occurred in Vietnam. I was working in eight villages. Roads were fixed in four of the eight villages. When new rice variety—the IR8 rice seeds developed by the International Rice Research Institute—the four villages with new roads were the only places they adopted. The other four never used them. I have seen it again and again, all around the world. Not only does agriculture innovation come down the road, education and human rights do as well.

If you were to lay out the world hunger map and you were to place the world rural road map on top of it, you’d find that where roads end is where hunger poverty and malnutrition begin. Agricultural innovation and new breakthroughs developed at CIP and other CGIAR centers all travel down the road. It is through that combination of where the green revolution coincided with infrastructural development. It is through that combination that we will either rise to the challenge of feeding 9 billion people (in 2050), or we will fail. 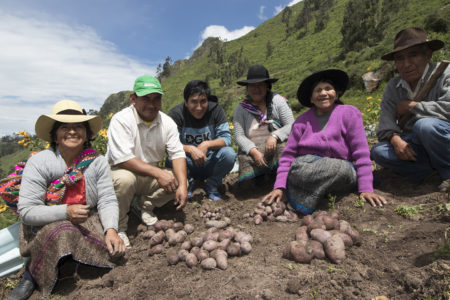 What role do farmers play in promoting agricultural innovation?

Farmers are the smartest business people I have ever encountered. Each season farmers confront the possibility that if their crops do not work, everything could be lost and they could fail. Farmers are naturally hesitant. They can be conservative, and understandably so. You have to be able to demonstrate to them that what you are bringing is really going to work. You have to build up trust.

Dr. Norman Borlaug, the founder of the World Food Prize, worked for 20 years with the poorest farmers. They kept trying to develop new miracle wheat. They crossed this variety and that variety. They would get some big crops of wheat, and they produced a lot of grain, but would it fall over. In building together with some Japanese varieties with strong stalks, and high-yielding disease-resistant Mexican varieties, they finally had the Eureka moment. Farmers who had come to trust him used this new miracle wheat, and everything changed. Mexico went from being a wheat importer to being self-sufficient in just a few years. It is that type of achievement that can make the difference to farmers and give them the opportunity to not only be successful and self-sufficient, but to having that surplus that is so critical to the development of successful businesses which make a profit and reinvest in what they do. 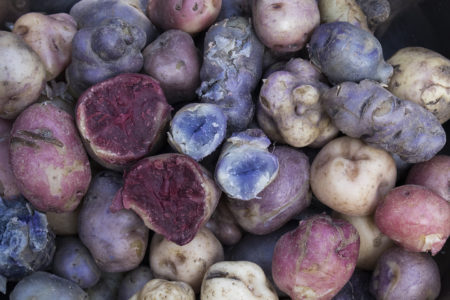 An assortment of native potatoes and iron and zinc biofortified potatoes bred with germplasm found in the CIP genebank. Photo David Dudenhoefer for CIP

What role does conserving biodiversity play in long-term food security?

Biodiversity is such an essential ingredient. The first woman World Food Prize laureate, Dr. Evangelina Villegas, worked at the International Maize and Wheat Improvement Center with Dr. Surinder Vasal dealing with the problem of low-protein low nutrition corn. In Africa, children who were weaned off their mothers’ breast milk when they were about six-months-old and started eating corn porridge would develop severe malnutrition.

Dr. Villegas and Dr. Vasal asked themselves how they could breed nutrients into corn so that when children would eat corn, they would be getting the vitamins and protein that they needed. One night they were looking at a variety of seeds on a seed table and saw some seeds that were unusual. They were translucent, and they turned out to be seeds from a very remote location that had a long ancestry, and they used them, and they bred them in and created quality protein maize. Today 75 percent of all the corn grown and consumed in Ghana is quality protein maize. It was such a lesson of the critical elements of biodiversity and what it can mean to farmers, what it can mean to those who are consuming the crop. 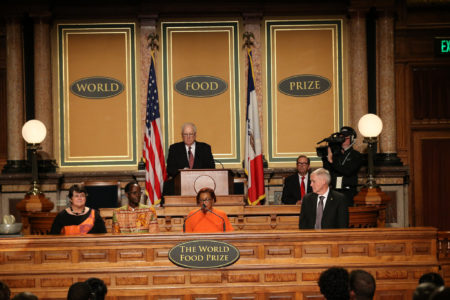 In 2016, three CIP scientists, Jan Low (from bottom left), Robert Mwanga and Maria Andrade, and Howarth Bouis of Harvest Plus, were awarded the World Food Prize for their work with biofortified orange-fleshed sweetpotato.

Why has the World Food Prize placed such a focus on biofortified crops?

Dr. Borlaug realized that eradicating hunger wasn’t just about having enough food. The focus had been on developing more high yielding crops, to ensure that people would have enough to eat, enough calories to work and fill their stomachs. That was goal number one, and they got there.

When they confronted things like childhood malnutrition and stunting they saw that children might not be getting all the nutrients they needed. It became a problem of not just sufficient food, but a need for nutritious food. How do you cut down on the terrible rate of stunting, both mental and physical?

Nutrition can be delivered in pills. When people live in much more remote areas how do you get that to them? You get there through biofortified crops.

At the 2009 World Food Prize, Bill Gates launched his billion-dollar effort to end poverty in the world. That same day he announced a 20 million grant to CIP to develop biofortified orange-fleshed sweetpotato. Who would have ever imagined that in only seven years, by 2016, Maria Andrade, Jan Low, and Robert Mwanga, would be able to develop biofortified orange-fleshed sweetpotato with enhanced vitamin A and convince people to eat it.

What role has the potato played in your life?

I was born in New York City, of Irish parents. All of my ancestors, my grandfathers, my great-grandfathers, all left and came to America, because of the potato. The potato’s journey that started in the 1500s from the Andes to Europe to Ireland, it led all of my relatives to America. Without the potato who knows where I would be or what I would do. I wouldn’t be an American ambassador. I wouldn’t have had the career I’ve had. It is painful of course to think of all the people who suffered from the starvation and hunger of the collapse of the potato crop in Ireland, but at the same time I realize the historic connection and how it changed the course of my life, all my relatives’ lives, and my children’s lives.

The World Food Prize recognizes individuals who have increased the quantity, quality, or availability of food in the world.