By the end of 2017, an International Potato Center (CIP) research-for-development initiative to expand the availability of quality seed potatoes in sub-Saharan Africa had improved the lives of more than 480,000 small-scale potato farmers. CIP and partners had also reached more than 4.5 million households in Africa, Asia and Haiti with nutritious orange-fleshed sweetpotato (OFSP). These are just two of the milestones covered in CIP’s Annual Report 2017: Harnessing Potato and Sweetpotato’s Power for Food Security, Nutrition and Climate Resilience. 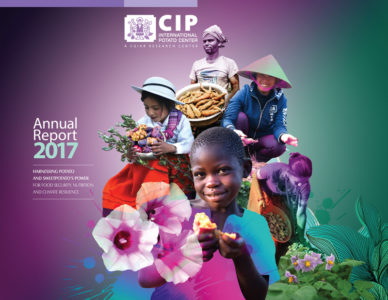 Potato and sweetpotato hold enormous potential for reducing hunger, poverty and malnutrition. They can be grown in an array of environments, produce food more quickly than grain crops, and contain relatively high levels of vital vitamins and micronutrients. CIP is collaborating closely with national and international research and development partners on several continents to tap that potential, helping root and tuber farmers produce more nutritious food, access better markets, and adapt to climate change.

The 2017 Annual Report features examples of this work from around the world:

Read about these and other innovations