Potato production in Africa can be increased by 140%: find out how

Potato, the third most important food crop after rice and wheat, is globally consumed by over a billion people. According to FAO statistics, potato production in Africa tripled from 1994 through 2011, from 8 to 24 million metric tons, but largely due to the increase of cropping area. Half of this production comes from sub-Saharan Africa where a recent study carried out by the International Potato Center (CIP) and its partners from 2013 to 2016 has shown that this level of production could be increased by 140% if identified causes of yield gap were addressed.

Yield gap is a simple concept: quantitative differences between a base-line yield (generally: average farmers’ yield) and either attainable (generally: experiment-based yield) or potential yield over some specified spatial and temporal scale. Thus, several yield gap types can be discerned. 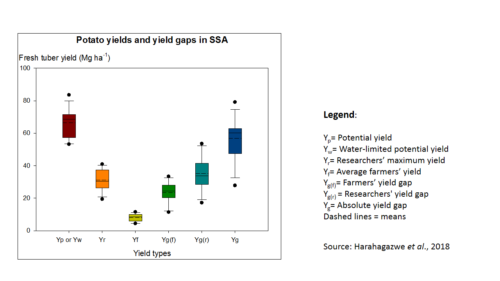 Modeling work conducted by CIP and its partners in ten SSA countries showed that farmer’s yield gap (24 t/ha) exceeds the current farmer’s yield (8 t/ha) as shown on the following graph. In other words, farmers are getting only a fourth of what they could produce on the same piece of land. About the causes, a six month online survey outlined twelve most important yield gap challenges out of an initial list of thirty. Poor quality seed was the top-ranked yield gap cause identified by survey respondents, followed by bacterial wilt.

This study used a novel and unique participatory methodology which consisted of three major components  (see conceptual framework): First, development of site-specific crop modelling tools and acquisition of agricultural statistics. Second, regional workshops for modelling and yield gap assessment. Third, online survey on yield gap drivers. To this end, a community of practice (CoP) was established in thirteen SSA countries: Nigeria in West Africa; Burundi, Rwanda, Kenya, Uganda, Tanzania, Democratic Republic of Congo and Ethiopia in Eastern and Central Africa; Cameroon in Central Africa; and Angola, Malawi, Madagascar and Mozambique in Southern Africa. The CoP revealed to be a powerful tool for data and knowledge sharing, especially in the context of scarcity of experimental information required for crop modelling.

Download this study: How big is the potato (Solanum tuberosum L.) yield gap in Sub-Saharan Africa and why? A participatory approach

africa, Agriculture, potato, yield gap
Menu
This site uses cookies. By clicking "I agree" and continuing to use this site you agree to our use of cookies. CIP PRIVACY STATEMENT
I agree