Is scaling up of technologies for sweetpotato reinforcing or reducing gender inequalities?

A recent paper published by scientists from the International Potato Center (CIP) shows how processes of scaling up of technologies to promote adoption can reinforce or reduce gender inequalities. This article is based on a gender analysis of sweetpotato seed systems conducted in Phalombe and Chikwawa districts in Malawi in 2013 and 2014. Technologies discussed in the paper include orange-fleshed sweetpotato varieties and sweetpotato vine multiplication systems. The paper looks at both research that is being done and how the resulting methods or models to improve agricultural practice are then scaled up for wide adoption beyond pilot villages.

Findings  illustrate that scaling up strategies to promote technology adoption by women should go beyond the technology itself to restructuring both the technical and non-technical aspects of agriculture. This will ensure women can fully benefit from improved technologies. Thus there is need to understand the physical and institutional context in which the technology is implemented in order to develop scaling strategies that ensure men and women are able to adopt and benefit. 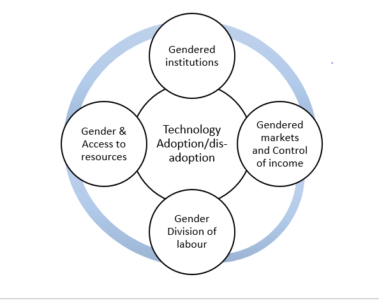 Key issues highlighted in the study are as follows:

Some topics pursued in the paper include how gendered institutions may discriminate women and prevent them from participating in technology development and scaling up processes.  The paper investigates how the interaction of institutions, technologies, socio-economic rules, images, ideologies influences the ability of different people to adopt technologies. 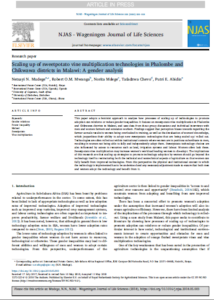 Read more from the paper: Scaling up of sweetpotato vine multiplication technologies in Phalombe and Chikwawa districts in Malawi: A gender analysis

Inclusive growth
Africa
Sweetpotatoes
africa, farmers, gender, gender AGRF, Malawi, ofsp, sweetpotato
This site uses cookies. By clicking "I agree" and continuing to use this site you agree to our use of cookies. CIP PRIVACY STATEMENT