On July 8, the First Vice President of Peru, Mercedes Aráoz, visited the headquarters of the International Potato Center (CIP) in Lima. She toured the CIP Genebank and met with scientists to learn about the Center’s 47 years of work conserving Andean root and tuber biodiversity, promoting sustainable agriculture, and improving the food security and incomes of millions of farmers through research for development in potato and sweetpotato.

“This meeting is part of an important work plan aimed at tapping the potential of our Andean tubers, which are essential but undervalued,” said the Vice President.

In addition to being the country’s First Vice President and a member of Peru’s Congress, Aráoz also serves as a ‘champion’ of the Food Forever Initiative – an international collaboration that includes CIP and is led by the Crop Trust. The initiative’s objective is to raise awareness of the importance and urgency of conserving and using agricultural biodiversity to improve food and nutritional security.

Araóz began her visit in the CIP Genebank, which conserves more than 22,000 accessions of global potato, sweetpotato and Andean root and tuber biodiversity for the benefit of humanity. CIP Director General Barbara Wells and Genetic Resources Manager Noelle Anglin gave Vice President Aráoz a tour of that state-of-the-art facility, which safeguards invaluable genetic diversity in the form of seeds and in vitro plantlets, and is pioneering the use of cryopreservation. 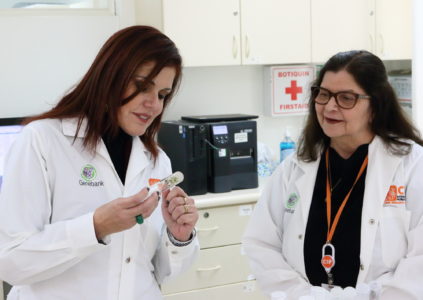 “Biodiversity is the basis of agriculture and represents an important resource for thousands of farmers. In this context, it is essential to ensure the sustainability of these crops and prepare for challenges such as climate change,” Aráoz said. “The potato is a gift from Peru to the world and we must all work together in a coordinated manner to preserve it.”

The Vice President met with leaders of CIP initiatives that have developed biofortified potatoes with between 40% and 80% higher iron and zinc content than most varieties, and resilient potatoes with resistance to diseases such as late blight and viruses, and tolerance to drought, heat or frost. She was also updated on CIP’s collaborations with the Government of Peru, such as a project with the National Institute of Agricultural Innovation (INIA) to coordinate the participatory evaluation and selection of biofortified potatoes for release as varieties in Peru, and a project with the Ministry of Social Development and Inclusion (MIDIS) to reduce anemia in the Urcos area of Cajamarca region.

“It is an honor for us to be able to show the Vice President the work that we do,” said Dr. Wells.