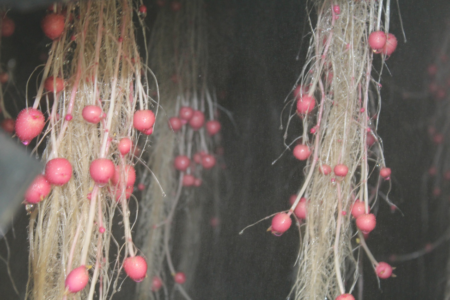 In less than a decade, potato minituber production increased ten-fold in seven countries across sub-Saharan Africa according to a recent study by the International Potato Center (CIP).  Burundi, Ethiopia, Kenya, Malawi, Rwanda, Tanzania, and Uganda have increased their production of Early Generation Seed from 483,000 to 4,921,000  minitubers thanks to country-level investment in seed potato systems to boost the production of high-quality seed. Actual production, however, remains far below the capacity in place.

“Currently 95 percent of potato farmers in Africa source their seed from informal seed systems, putting their productive capacity at a major disadvantage,” says Dieudonné Harahagazwe, one of the authors of the paper. “As the starter material for onward field multiplication to bulk seed, increasing production in Early Generation Seed has the potential to help break the seed bottleneck and put quality materials into farmers’ hands. Studies such as these help us understand where organizations should invest efforts and resources based on the local context and infrastructure,” he adds.

Potato is increasingly becoming one of the top food crops in sub-Saharan Africa in terms of production, regional trade, and consumption. However, potato growers (mainly smallholder farmers) still face many challenges that cause huge yield gaps with direct impact on their livelihoods and income. The countries featured in the study have invested in Early Generation Seed production, the material that seed multipliers use to produce more seed, making it a critical component in developing a healthy seed system to help farmers close the yield gap and meet their full productive potential.

Early Generation Seed is defined as the planting material produced either in tissue culture laboratories or under protective structures, such as screenhouses or greenhouses, by specialized entities. Seed multipliers use Early Generation Seed to produce certified or quality declared seed for farmer use in the lead up to the planting season. Early Generation seed can be produced in numerous ways, including as in vitro plantlets through Rapid Multiplication Techniques such as micropropagation, cuttings produced from mother plants, or minitubers produced by hydroponics or aeroponics, or through the  conventional multiplication technique of growing in vitro plantlets in a substrate made of soil, sand and peat, or compost.

“This CIP study aimed at assessing and documenting the current situation in Rapid Multiplication Techniques in the region,” says Jorge Andrade-Piedra, a CIP scientist specializing in plant pathology. “They are the first step to producing high-quality seed and are frequently reported as a bottleneck in potato seed systems.” 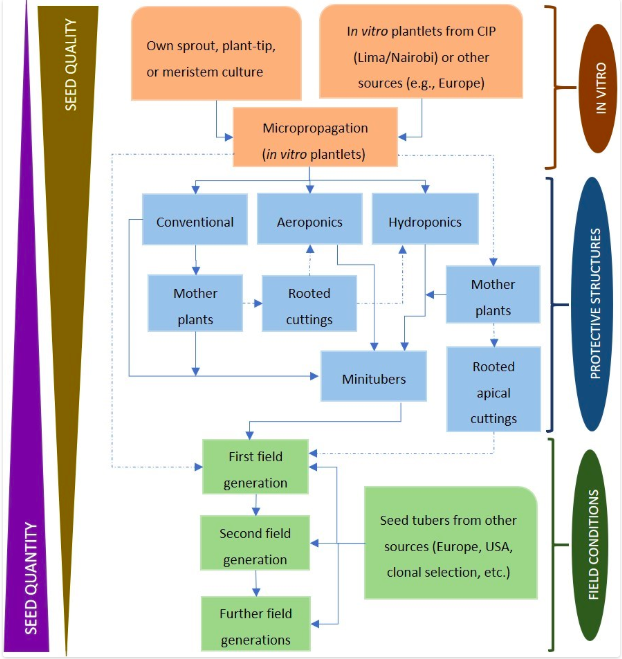 CIP conducted research on the state of Rapid Multiplication Techniques of Early Generation Seed through a series of face-to-face interviews, personal observations and data, and phone calls that took place from November and December 2017. The survey included questions grouped in the following clusters: What is being done? How is it being done? And, what is the performance? The study provides insights on the main schemes actors, production capacity, and challenges to produce Early Generation Seed potato in sub-Saharan Africa.

“By taking a deep dive into each of the specific Rapid Multiplication Techniques and conventional techniques in location-specific contexts we are able to better understand the limitations, benefits, and required resources that each technology demands,” adds Andrade-Piedra.

Kenya, Rwanda and Tanzania are the major producers of minitubers, all experiencing  growth in production from 2008 to 2013. The conventional technique is the most used technique for producing minitubers: it accounts for 49% of the total production capacity, followed by hydroponics (30%), and aeroponics (21%). 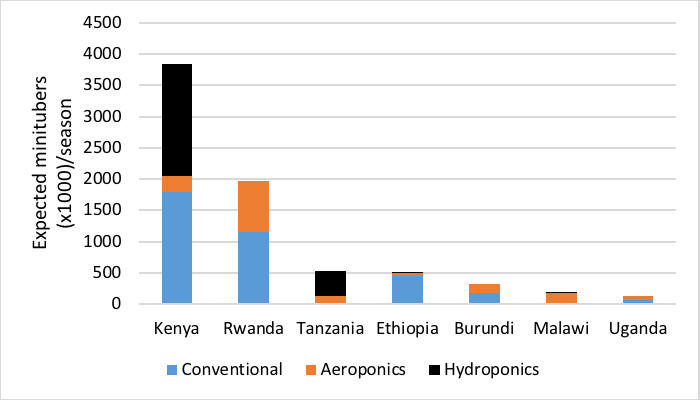 Capacity of facilities used for potato minituber production in seven SSA countries. Figures represent total tubers that could be produced if current facilities were used at full capacity.

Techniques used to produce minitubers vary widely in terms of yields and challenges. Yield obtained with the conventional technique is 8-12 minitubers per plant, whereas the same plant is likely to produce 37-47 minitubers in aeroponics, and 9-13 minitubers in hydroponics. However, aeroponics is much costlier and riskier (e.g. the need for continuous electricity) and requires more skills than the conventional technique and hydroponics, which are more resilient with less upfront and running costs.

However, technologies are not the main challenge. “The problem is not to produce Early Generation Seed potato at large scale but how to sell our produce and sustain the business,” says Gabriel Bizimungu, Managing Director of Horizon SOPYRWA, a private seed company operating in Rwanda. In addition to providing a snapshot of the current situation the study also provides case-specific suggestions on how to improve the efficiency of Early Generation Seed production.

“Lack of access to quality seed severely hampers the productive potential of potato farmers,” says Monica Parker, a scientist at CIP and a contributing author of the study. “On average farmers using recycled seed and seed of unknown sources are yielding between 6-10 tonnes per hectare rather than the 20-25 tonnes per hectare they could achieve under standard conditions. By addressing barriers to success such as ramping up seed multipliers access to Early Generation Seed we can help to alleviate seed bottlenecks and be on our way to developing well-functioning seed systems that get quality seed into the hands of farmers who need it.”

This research was undertaken as part of, and funded by, the CGIAR Research Program on Roots, Tubers and Bananas and the International Potato Center supported by CGIAR Trust Fund contributors.